Worldcoin: The Dystopian dark-side of Web3 and Cryptocurrencies 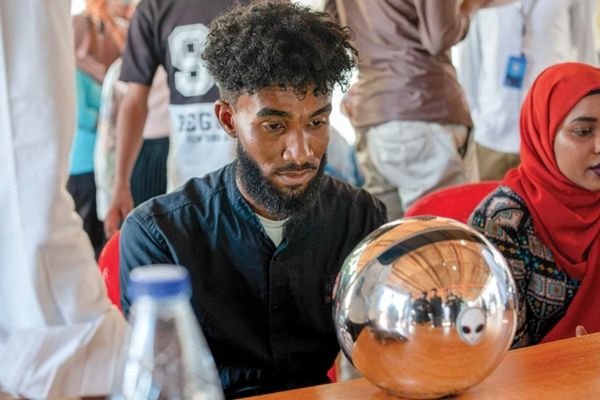 What is the guy in the picture staring at?

It is the Worldcoin "orb". A metal sphere that looks just off of a dystopian sci-fi movie. The story of Worldcoin is in fact dystopic and shows the dark side of web3 and cryptocurrencies.

Inspired by the basic-income concept, the company's vision is to fairly distribute its cryptocurrency (WLD) to every person on earth. But first, it wants to scan everybody’s eyeballs in order to avoid fraud. This is what the "orb" is for: a feminine robotic voice asks you to come closer and open your eyes: "Initiating scan".

It has raised funds from top investors like Andreessen Horowitz, the venture capital arm of Coinbase, Reid Hoffman and others.

However, it hasn't got much publicity.

Its cryptocurrency hasn't been launched yet, although it was meant to last summer, and then again at the end of last year and now "sometime in 2022". I guess this shouldn't be concerning, delays happen.

But it is concerning, when the coin was promised as a financial reward to the hundreds of thousand people who already registered over the past two years and agreed for their eyes to be scanned.

Worldcoin has mainly operated in poor and developing countries, like Sudan, Ghana, Chile and Kenya to name a few. This is instrumental to get more people to sign up. A small financial reward in exchange for valuable biometric information is more appealing to uneducated and poor populations, than even to the most crypto-enthusiast nerd in the rich world.

In fact, the company is scanning as many people as possible to train its AI algorithm. The scope is to identify unique eye scans and avoid duplicates as well as bots. The same system can be used by (or maybe sold to?) other web3 applications for identity verification purposes.

This involves huge privacy concerns, which the company hasn't clearly addressed yet. Somewhat ironically, the whole point of crypto is for our personal data to be "crypto" and anonymous. Well...

There are reports of people being misled and given false promises. Many didn't even own a smartphone and so couldn't install the Worldcoin wallet to redeem the coins. Many felt literally scammed.

With personal data being the most valuable asset of the 21st century, tech companies are racing to get as much of it as possible. It's just easier and cheaper to get it from poor countries, where privacy regulations don't apply.

To know more about this story: